Has God forgotten me? 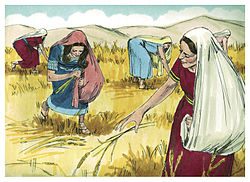 Have you ever wondered how people can believe in someone or something they can’t see? Or maybe you once believed in God, but not anymore.

I want to tell the story of someone who also struggled to believe in God.

Naomi was an Israelite woman married to Elimelech. At that time there was a great famine in the land of Israel and she and her family moved to the land of Moab. Her sons married there, but soon afterwards Elimelech died. Then both of her sons died too, leaving their mother alone and a widow.

Naomi felt that God had forgotten her.

She decided to go back to the land of Israel. Ruth, one of her daughters-in-law, went with her. Ruth was from Moab, so she was a foreigner in Israel. Life was tough for the two widows because there was no one to take care of them. Naomi was also old, so she couldn’t work. But Ruth was loyal to her mother-in-law and she worked hard to gather enough grain for the two of them to survive.

God brought Ruth to the field of a man named Boaz. He was very kind to her and let her gather food alongside his harvesters. When Ruth came home, she told Naomi how kind Boaz had been to her. When Naomi heard that Ruth had been working in Boaz’s field, she rejoiced because Boaz was a close relative of theirs!

In Hebrew culture, if a man died without children, it was custom for one of his close relatives to marry his widow in order that his family line could continue and so that those he left behind could be cared for. Naomi sent Ruth one night to ask Boaz to help her and her family, since he was a relative of her husband who had died.

Boaz was an upright man and he was prepared to marry Ruth and redeem her family, but there was a closer relative who had first right to marry Ruth. The next day Boaz spoke to this relative. At first the relative wanted to redeem Naomi’s family because he would inherit Elimelech’s land, but when Boaz told him that he would have to marry Ruth, he was afraid and changed his mind.

God arranged for Boaz to marry Ruth! Soon Ruth had a child. Naomi was so overjoyed with this child, that she nursed him as her own son. This son was very special, because he became the grandfather of King David. In fact, from his family line Jesus Christ was born!

After Naomi had suffered so much, God remembered her and blessed her with a joyful family and a special child.

If God remembered an old suffering widow in a foreign land, do you think He has forgotten you?

Read more in The Book…

The story of Ruth

But Ruth said, “Do not urge me to leave you or to return from following you. For where you go I will go, and where you lodge I will lodge. Your people shall be my people, and your God my God. Where you die I will die, and there will I be buried. May the Lord do so to me and more also if anything but death parts me from you.”